It's a Trap — How Honeypots Help Defenders Gather Threat Intel

Before becoming a cybersecurity tool, honeypots were an espionage technique in which spies used physical relationships for blackmail and coercion. In today's digital economy, honeypots still serve as a decoy; they are digital assets that can be made to look like legitimate devices, such as servers, payment gateways, or networks, but instead acts as a decoy to trick threat actors. The organization that deployed the honeypot uses it to gather information about the attackers, such as their tactics, techniques, and procedures (TTPs).

A well-designed honeypot can serve as an excellent entrapment strategy that encourages threat actors to waste their time within the decoy environment — and not in your network. Let's review some of the benefits and risks associated with honeypots.

While you don't need a dedicated SOC to run a honeypot program, they will require maintenance and response to any threat detections. Security analysts can review honeypot traffic to understand what services are being targeted and which vulnerabilities are being exploited. Those in the digital forensic and investigation (DFIR) field understand the importance of reviewing logs, e.g. from Security Information and Event Management (SIEM), to understand how any attackers got into the system. Well, the same is true for honeypots. Logs, generated by honeypots, can be analyzed by security personnel to understand the attacker’s TTPs – but luckily no system has been breached.

Honeypots can emulate a range of services, offering varying levels of functionality and complexity. There are typically four main types of honeypots, each with different levels of interaction.

Typically designed to emulate one specific service (such as a database), low-interaction honeypots will respond to a limited set of actions. While these honeypots are quick to set up and easy to deploy, they are usually easy to identify, and attackers may show little interest in them.

Often emulating one or more services (such as a web server, database, etc.), medium-interaction honeypots can respond to more advanced commands. As a result, these honeypots may require more specialized knowledge to set up but may be more convincing to threat actors due to the increased range of responses.

These are fully-fledged operating systems configured with known vulnerabilities and weaknesses. These honeypots require expert knowledge and supervision to design, deploy, and monitor. Since these honeypots are actual systems, they are the most convincing to attackers. However, due to their complex nature, pure interaction honeypots carry the most risk and require considerable time and resources to run.

Before setting the trap: implement the basics

While honeypots can be an important part of a cybersecurity strategy, it's always best to start with the basics.

There are many low-cost and easily deployed defensive measures that companies should focus on to create a defense-in-depth security strategy. We recommend all organizations implement multi-factor authentication (MFA) as well as a strong password management policy. Endpoint detection and response (EDR) tools work to detect and respond to the presence of threats on your network while maintaining (and testing!) offline backups of critical business data. This is essential should you ever become the victim of a ransomware attack. Without a strong foundation, honeypots will likely add no value to your security strategy.

Coalition seeks to understand not only what new vulnerabilities are announced but also how threat actors use them. This is an important piece of the puzzle we use to stay one step ahead of threat actors. 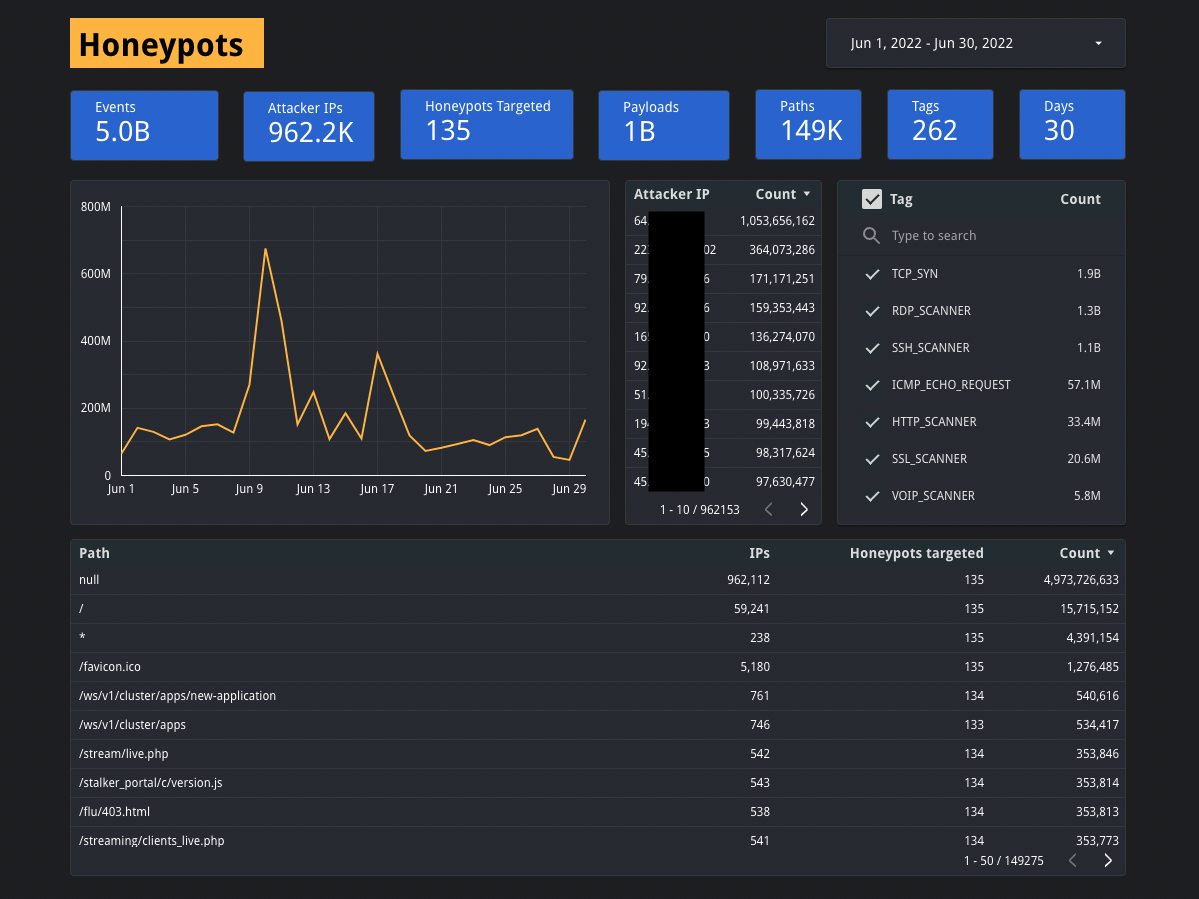 Screenshot of our honeypots dashboard showing 5 billion events during June 2022.

We have an entire team focused on building fake, vulnerable honeypots that emulate business networks and pose as such on the internet. The information garnered from Coalition’s honeypot operations helps our cybersecurity team inform the future protection of our policyholders.

When a new vulnerability (such as Log4j) is discovered, we typically see attackers targeting it on our honeypots. These attacks give us crucial intelligence about how popular and widespread the vulnerability is being exploited in the wild. Our honeypots are deployed across the globe, allowing us to detect geographic patterns and monitor trends across service providers. 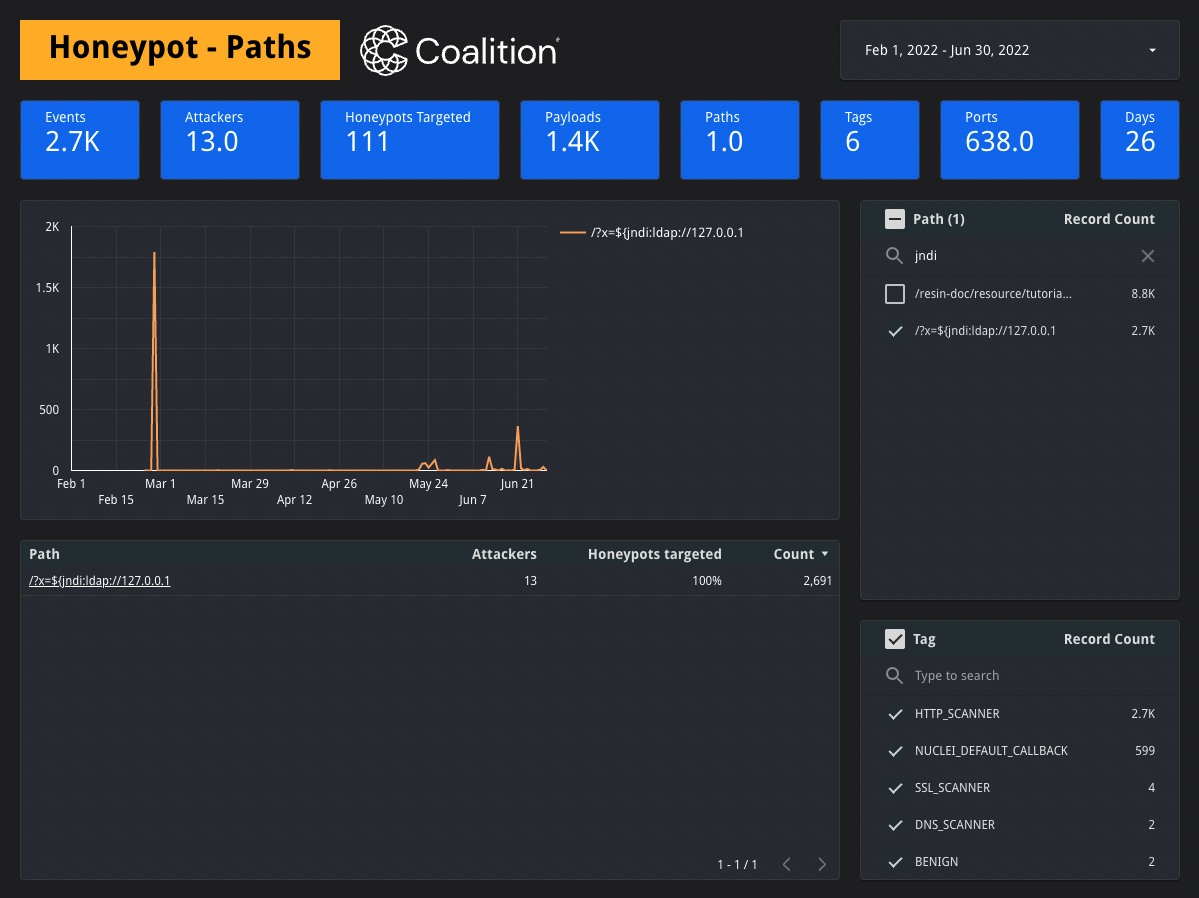 Alongside our honeypots, we also deploy sinkholes. These devices capture all network traffic sent to them, producing valuable data and insights into global network activity. Even if a new vulnerability comes out that we don’t have a honeypot for, we still capture the important payload traffic on our sinkholes. We also detect network activity with our sinkholes that honeypots would miss.

If you want to see the vulnerabilities that might exist on your network, log into Coalition Control now.

* Insurance products may be underwritten by Westport Insurance Corporation or an affiliated company, which are members of Swiss Re Corporate Solutions.